55
Song Lyrics for ALL Adventure Time Songs
posted by obssesedTDIgirl
I don't really update this anymore! If te really want to see ALL the songs click link.

Adventure time,
Come on grab your friends,
We'll go to a very distant land,
Jake the dog,
and fin the human,
The fun will never end,
Its adventure Time! 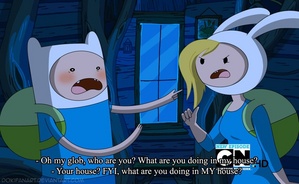 One day, Finn and Jake were playing BMO games at home while Fionna and Cake were Adventuring da fighting an evil monster near Finn and Jake's grassland kingdom. Then the evil monster threw Fionna and Cake so hard all the way to Finn and Jakes treehouse that the bacheca has crashed. Fionna detto "What?, another house of our's?"then Finn suddenly saw Fionna and detto "Who are te and what are te doing at my house?", Fionna detto "Well,what are te doing at MY house!?" Then Jake saw Cake lieing at the floor and detto "Finn!, we got an intruder!" and Finn detto "There is also one here...." And Fionna...
continue reading...
1
Why I Hate Princess Bubblegum
posted by ThisRedApple
Before te Princess Bubblegum innamorati go on and go hating on me, I would just like to point out that this is my opinion. Please be respectful about it. Also, I am making this articolo because te might see me hating on PB for no reason, but I do.

Now, where do I start? Ah, yes. With her science obsession. Princess Bubblegum is just so fucking obsessed with science that she does not even give time to those who need her. I am not also a big fan of the Science subject so I am not amused at all with her character.
If I can remember correctly, she was so obsessed about revenge and her complexion in...
continue reading...
My opinion on Fionna and Cake..
posted by Raymantlegend
Well as you've probably realized this articolo is about Fionna and Cake and the whole "gender swapped universe".

I hate Fionna, Prince Gumball, Marshall Lee etc. (*everyone gasps). WHY? This is why..

First of all: Why is it necessary? Honestly I don't understand the need for them!
Adventure Time has an incredible amount of weird, wacky, adorable, complex and simply awesome characters.. But instead of giving us a bigger insight on all these characters (like FP o Simon and Marceline) Cartoon Network go and create more, which is totally okay da me.. But the stupid thing is that they don't create...
continue reading...
Last Stand game guide
posted by IsabellaFanboy
This is a multiplayer zombie fighting survival game where all the survivors must work as a team to survive...

__JOINING__
-Everyone can join!
Please unisciti at the link
If te played the beta of this game before... te still have to introduce yourself...


__STORY__
The story takes place in post-apocalyptic Earth. The story will live on after we start playing...

__ADMIN PLAYED CHARACTERS__
Yes there will be più survivors... and I will play their role... people are most likely to unisciti our team if we are successful

Officially dato permission da ATFan1 to make this senseless - I mean imaginative fanfic, as a supplement (like what was the fan-made cause of something in the original fanfic. GEDDIT) to the original.

Someone perishing far away was such a horrible sight to see for a human bestowed with Eagle Vision.

An elemental with a red aura stabbing a person with a similar white glow same to the last human Assassin...

1) She's too old for him. It's the most common and most valid. She's too old for him, which may be the reason why she keeps pushing him back. Remember in Too Young she detto that she didn't want to grow up, she wanted to be 13, with Finn? She detto she...
continue reading...
Season 1 Song Lyrics
posted by emerald_32
Song Lyrics for Season 1 songs

Finn: Baby, (Jake: Ooo!)
Finn: I know what te need, (Jake: What's that?)
Finn: te want your little baby socks...
for your little baby feet. (Jake: Woooo.)
Finn: Baby, (Jake: Yeah?)
Finn: I know what te crave, (Jake: Oh yeah? What's that?)
Finn: te want to poop your pants all giorno long,
well baby behave!
Finn: Baby... te lookin' so good,
You lookin' like te might... want some baby food. (Jake: Keep it goin', man!)
Finn: Baby, te lookin' so fine.
You lookin' like te might... just start cryin'.
Finn: I gotta tuck te in, girl.
I gotta sing...
continue reading...
6
Why I Hate PB And Like Marceline
posted by stellamusa101
Well a lot of people have been saying “Why do te hate PB? You're crazy!” (well, my Friends at school) and “Why do te like the teen vampire Marceline?”. And also here people want to know why. So I guess I should let out my opinion!

Princess Bubblegum – I hate her
Well my first reason would be because she's too full of herself…and if I correctly in "The Duke" when she turned [completely] green, she was SO worried, she cares about her skin too much. My other reason would be because she's too girly and scientific for me– this is an unpopular reason; I don't like her scientific ideas...
continue reading...
You Might Also Like...

Le Superchicche
3
Which character are you? Find out here!
posted by stellamusa101 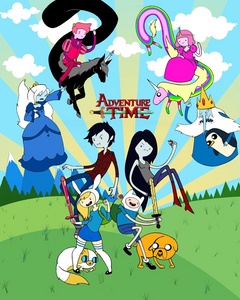 What time is it?! Adventure Time!!
Which character mostly fits you? Find out here!

1.Who is your favourite character?

2.Whats the motto of your life?

3.What describes te the best?

5.If hotdog princess wants to baciare te but te don't want to, what do te do?

Leixie is a 16 with viola eyes, dirty blonde hair and is 5ft'3in tall. She loves reading, wrinting , Canto and swim when she not practice dragonspeak, battle moves. Best Friend: Lightning dragon sliver 14 years old very portative of Lexie Boyfriend: Victor Vampie deep loves Lexie do anything for her Lightning and him don't like each other very much.

Lexie lives in village caves on the edge of oo. She tough warrior has a cople of battle scars. She is alwaystrying to make the world a better place.

"Lexie,Where are you?" asked Lighning

Here's a link mostrare the first part named after the titular game-boy "BMO".

From the link:
"HBO Max is taking us back to the Land of Ooo with four new Adventure Time specials, billed as Adventure Time: Distant Lands; the one-hour episodes will reunite fan with characters from the original series, which wrapped its 10-season run on Cartoon Network in 2018."

Alongside familiar faces such as our hero Finn and his stretchy dog Jake, there are new guys joining alongside. Watch the trailer and judge for yourself whether they'll fit!
Character Facts of the Week: The Earl of Lemongrab
posted by kittylover16 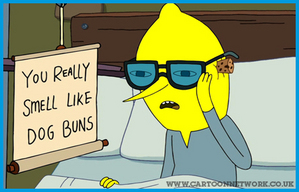 The Earl of Lemongrab is one of the characters from Adventure Time, along with Finn and Jake. Here are ten facts about the character. Did te know all of them? Let us know below if te know any more!

1. The Earl was "born" in Princess Bubblegum's laboratory. He was created so that he could rule the caramelle Kingdom if the Princess ever became unable to do so.

2. When he found out that Princess Bubblegum was "too young" to rule the kingdom, the Earl travelled to her castello on his limone Camel, immediately declared her castello to be in "UNACCEPTABLE CONDITION," and threatened to send all of the residents...
continue reading...
A must see comic
posted by dadadas
A very intersesting,fan - made,incompleted comic Press "CTRL" and key "+" to see clearly 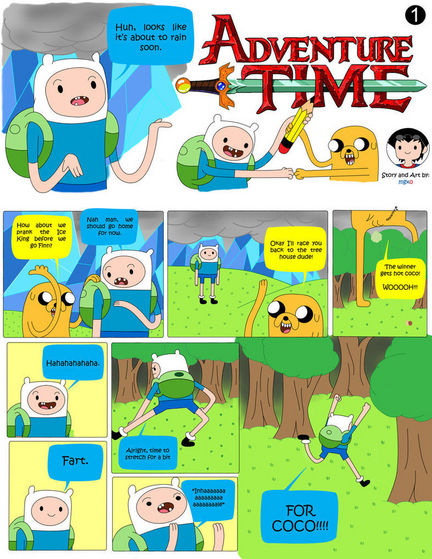 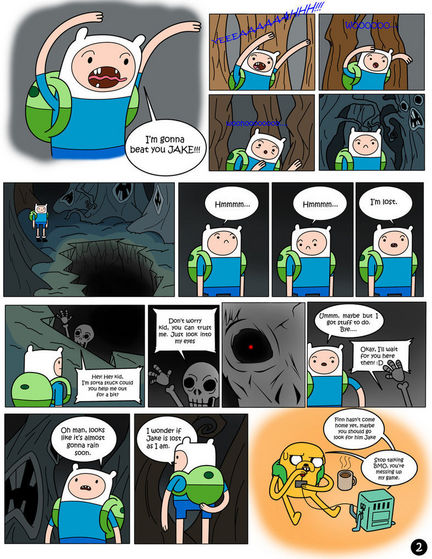 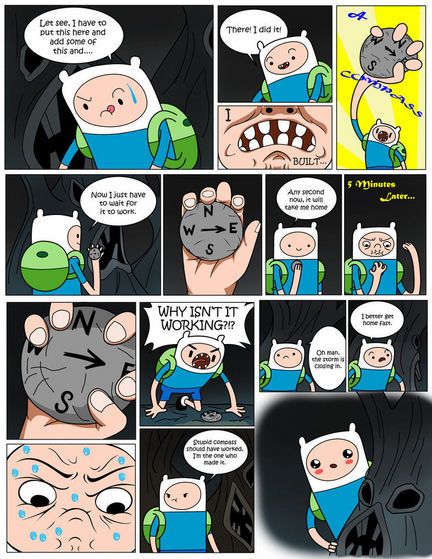 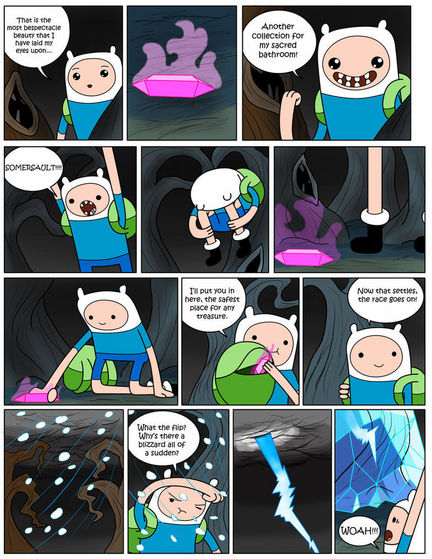 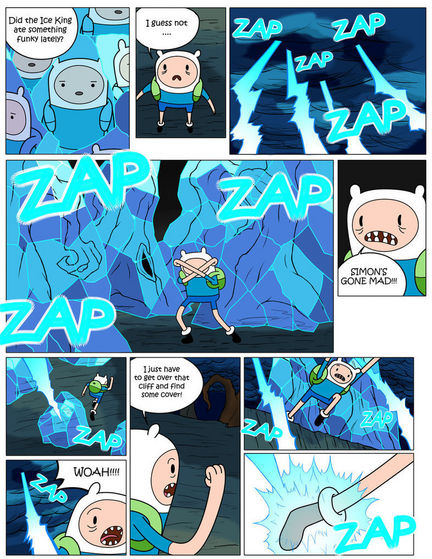 Adventure Time: The Awakening of Heroes!
posted by kittylover16

Disclaimer: I don't own any character, name, place o whatever mentioned in this story, everything belongs to Cartoon Network, and Pendlenton Ward. And THIS IS SERIOUSLY NOT MY STORY.

Adventure Time: The Awakening of Heroes!

Two warriors stare at each other waiting for their fight to begin. The announcer starts the count: "3 – 2 – 1…GO!" The warrior on the left, an 8-bit ninja, makes the first sposta and starts running towards his enemy, an 8-bit pirate with a big black hat.

"WOW! This battle has become an explosive display of...
continue reading...
1
An Instrumental SongFic: Insomnia
posted by astigpinoy
Pairing: te CHOOSE! Anything goes with Finn.
(You will have to fill in the ending, though.)
Song: I miss te even in my sleep - Igor Krutoy
(A/N: NN:NN-NN:NN corresponds to the min:sec to the successivo min:sec. Geddit?)

Use your imagination as Finn goes through everything.

00:00-00:44
It was deep in the night, when the human boy sat helplessly in continuous thoughts.
Finn saw something that flashed in his mind:
Notes of an orchestra and...
continue reading...
2
Will Fionna and Cake ever come back?
posted by chillyneon
Well, rumor has it that Fionna and Cake will come back, which is probably true. It is seen on the adventure time wiki that theere are adventure time comics for about every mostra they made. It is shown on one page that ice king is making the sequal to his book Fionna and Cake. The sequal is called Fionna and Cake meet Finn and Jake, which could give us a hint to a upcoming episode. It is shown that ice king is Scrivere his fan fiction until a green portal appears in his home, sucking in all objects that are in his home. There aren't any più pages I could find of this, but I hope this helps you. THANKS!!!!!
2
Adventure Time lista o' Theories
posted by DerpThatHerp 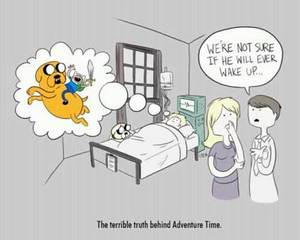 The Terrible Truth behind Adventure Time
Yes these are theories that fan have come up with over the years. So i thought it write them out

The Theory: Finn was a lonely boy ignored da everyone but his loyal dog Jake. When Jake dies, Finn falls into a deep depression and attempts suicide. Instead of dying, he ends up a coma, where he lives in a perpetual dream state.

Why it could be true: I DON'T WANT THIS TO BE TRUE! Why is it that fan theories are always so gut-wrenching? This one is courtesy of Creepypasta. Basically all of the stories in Coma Jake's head are ones he used to tell Jake before he died. A fantasy world where he was a...
continue reading...
More Cards
1234567891011