Bad Piggies Cookbook App Main Screen
Amidst all the hoopla of aggiornamenti here in the Angry Birds Universe — from the release of Bad Piggies to their invasion of the original Angry Birds app — there has been quite a bit of news not related to actual gaming.

About a anno ago, Rovio released a hardcover book called Bad Piggies’ Egg Recipes, which featured many different recipes for cooking eggs and all that jazz. (If you’re interested, we wrote about it briefly last July.) But dato the new “digital” age of — well, of absolutely everything in the world — this book has been turned into an app for...
continue reading...
2
Angry Birds Seasons Haunted Hogs Update Out Now!
posted by Patrick-Star54

Angry Birds Season Haunted Hogs Main Screen
Boooo! We broke the news of this update first. Angry Birds Seasons v3.0.0 is now available for iOS, PC, and Android via Google Play, with più platforms coming soon. The update includes a brand new episode called, “Haunted Hogs”, which appears inside a new, “Seasons 3″ group. In typical Seasons fashion this looks to be a spooktacular update. Without further ado, let me jump into the gory details.

30 new levels that take te deep inside a haunted mansion. Did one of those spooky paintings in the background just blink at me? Run!!!! Ahhhh!! Vampire-pigs, Fraken-pigs,...
continue reading...
1
Angry Birds McDonald’s Web Game Now Available
posted by Patrick-Star54

A new collaborative promotion between Rovio and McDonald’s China is now available! This is a brand new web-based mini game called Angry Birds McDonald’s. te can play this in most any modern web browser, excluding mobile and tablets, da going to mcd.angrybirds.com. The game does require Flash.

You will have to register in order to unlock any levels beyond the first two. Easy enough…if te speak and read Chinese. While we’re not native speakers, we have deciphered it well enough to provide te with these instructions. To sign up, te have to click on the bottom-right most button (just...
continue reading...
5
Angry Birds spazio
posted by kellyclarkson12

The first posters before the Press Release first appeared in February 17, 2012. The very first poster featured a full sized page of the Super Red Bird along with the first video in the 16th. After the trailer, they released the secondo trailer on the 23rd mostrare two astronauts on a slingshot. Then in the 24th with the third trailer...
continue reading...
1
Bad Piggies Ultimate Backup Tutorial for all Platforms
posted by Patrick-Star54
Are te worried about losing all of your hard work in Bad Piggies? Scared those sneaky pigs may sneak up behind te and eat your progress? o are te just looking for a little extra security in your gaming life? The goal of this guide is to help te in the event something goes horribly wrong. In some cases, these backup methods can ALSO be used to transfer your progress to another device. This way te don’t have to start from scratch. That said, as of now transferring progress only really works when the devices are the same (e.g. iOS to iOS, for example).

SURPRISE! Angry Birds v2.3.0 is now available for iPhone and Android via Google Play, and with più platforms — including iPad — coming soon. Now that summer is well behind us (for the northern hemisphere, anyways), the classic “beach” theme of Surf and Turf has been concluded. It doesn’t stop there though, as those sneaky piggies have poked there noses into the original Angry Birds game with a brand new episode (Greedy Pigs! As if having their own app wasn’t good enough!).

Note, still waiting on iPad update. There must have been an issue that needed to be addressed. We will let...
continue reading...
1
Bad Piggies Unleashed: New Gameplay Details Revealed
posted by Yellow-Bird
Squawk! Oink! Another day, another exclusive look at Bad Piggies. This time X-Play sits down (literally) with Rovio’s own Andrew Stalbow. This exclusive sneak peek comes on the heels of the amazing Bad Piggies Gameplay Trailer we saw on Monday. The difference? Well, this one reveals quite a bit più info, including some of the bacon-bits we thrive on.
What we know now!

The Game: The slingshot is replaced da your imagination and engineering prowess! Start the level da building an effective vehicle o contraption using the supplies on hand. The goal is simple: carry the Pigs from the start of...
continue reading...
1
Greenday Team With Angry Birds
posted by Yellow-Bird

Pretty much everything about Green Day's upcoming trilogy of albums (beginning with the fact that it's a trilogy of albums) could be described as "non-traditional." So it sort of makes sense that, in keeping with their recente run of secret shows and musical cameos on "CSI: NY," they've chosen to team with the folks behind "Angry Birds" for a special version of the vaunted game/time waster (take that, Kanye.)

If te play Angry Birds Chrome, the past 60 days o so have been absolutely outstanding. Today’s update marks the third update in less than two months, and adds two — count them: TWO — episodes to Seasons! te can now play both Trick o Treat and Mooncake Festival (the α and ω of the 2011 Seasons lineup, respectively).

Also included in this update is a direct link on the initial “Play” screen to Angry Birds Friends on Facebook. A minor addition, but still notable, as Rovio continues to plug their Facebook app.
1
Angry Birds Seasons “Haunted Hogs” Update Coming Soon!
posted by Patrick-Star54

You’ve heard it here first! I think we can put the speculation to rest. In keeping with tradition, Angry Birds Seasons will receive its third annual Halloween update. And not only do we know that the update is coming, but we are relatively sure it will be called, “Haunted Hogs”. This could obviously change, but only time will tell.

Now, details are very very sparse at the moment, but we are willing to speculate about a few things. Our disclaimer here is that absolutely nothing is confirmed o official, but since these domande will likely be asked da fans, we will express our opinions...
continue reading...
You Might Also Like...

We announced back in July that Angry Birds Trilogy was coming to major gaming consoles, and the wait is now over! That’s right, te can now fling birds on the big screen if te have XBox 360, PlayStation 3, o (on the slightly-smaller) Nintendo 3DS. The release is slightly overshadowed da the upcoming release of Bad Piggies, but it is still big news. There is a trailer coming soon, and più can be found info at trilogy.angrybirds.com, including links to purchase.

Here’s what we know immediately:

This is a single gaming cartuccia that contains the majority of levels from the original Angry...
continue reading...
4
Angry Birds Seasons Winter Wonderham Update Now Available!
posted by Patrick-Star54

Angry Birds Season Winter Wonderham Main Screen
Happy Holidays, to one and to all. Welcome the Winter and say goodbye to the Fall. Be merry and happy, whatever the reasons. But do not miss this update to Seasons!

That’s right, the Winter Wonderham update to Angry Birds Seasons (v3.1.0) is now available for iOS, PC, NOOK Color, and Android via Google Play and the amazon Appstore. più platforms will be getting the update very soon. We were the first to confermare this update, posting some GameCenter imagery about two weeks fa and exclusive Rovio-official details yesterday. This is Rovio’s third episode to celebrate the Natale and holiday...
continue reading...
1
Bad Piggies Flight in the Night Update Now Available!
posted by Patrick-Star54 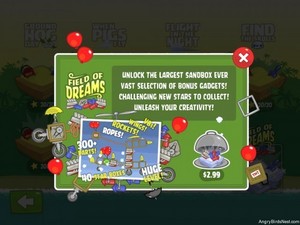 Fields of Dreams Sandbox. New “Field of Dreams” Sandbox level that is available for $2.99 as an In-App Purchase. This level is massive and includes 40 stars, not 20. It also includes a bunch of extra parts, including: V8 Engines, new wings, rockets, r
Less than one mese after the initial release of Bad Piggies, Rovio has graced us with the app’s first update. The update, v1.1.0, adds a new episode called Flight in the Night as well as some other twists, which we will detail below. It’s now available for download for iOS with other platforms coming soon. If te are new to Bad Piggies, be sure to check out our original release post, which includes a lot of information about gameplay and a great tutorial video done da us.

Angry Birds Space
Exactly one week before the release of Angry Birds: stella, star Wars, it seems Rovio did not want to leave any lose ends hanging around. As such, Angry Birds spazio v1.3.1 is now available for iOS, PC, and Android via Google Play, with più platforms coming soon.

Final 10 levels of Red Planet! Our walkthrough pages and video are LIVE, viewable on the Red Planet walkthrough page.
One più spazio Egg! This will be awarded for 3-starring 10 levels of this release. Our Complete spazio Egg Guide has been updated and has più information.
New Golden Rover! Our Complete Eggsteroids Guide...
continue reading...
2
Angry Birds Newsletter: Bad Piggies Preparing to Retaliate Against the Angry Birds
posted by Yellow-Bird

Alright, details are sparse at the moment, but Rovio is definitely planning something. Sometime during the night the Pigs formed themselves a union and decided they needed to go public (you can see their press release below). In addition to the press release, those portly pigs have launched their own Facebook and Twitter accounts. So what’s going on? My guess is this will eventually end up with a brand new game, but that’s just me. Whatcha thinkin?! Yu likez? Share your insightful thoughts and opinions below.

Here is copy from the official press release from the, “King Pig Office” on “Piggy Island”:

* Disclaimer: Icon obviously not official
‘Tis the season for zabaione hangovers, twinkly lights, bolded text, and … Angry Birds! We are here to bring te another worldwide exclusive! No reason to ask Santa for an update when Rovio is feeling as generous as Ebenezer Scrooge after being visited da the Ghost of Natale Yet to Come. Angry Birds Seasons “Winter Wonderham” will be the third annual winter update to this epic franchise. Like Halloween, it’s a true tradition.

After destroying the Death Star, the Rebel Avian Alliance moved its base to the ice planet of Hoth (they later regret this decision, as it’s rather cold). Weary from defeat and hungry for a victory the Imperial Pigs have dispatched probe droids to nearby planets with of hope of discovering the location of the rebel...
continue reading...
The Complete "Angry Birds Space: Rocket Science Show" Episode lista (with hyperlinks)
posted by grabbit
Discover amazing facts about the solar system with Angry Birds and NASA!

Now we are going to space! Not only does Angry Birds spazio feature a setting that rocks, but the gameplay will be unique and challenging. Rather than changing just the scenery, te are getting a complete overhaul of the gameplay since you'll now have to factor in gravity and planetoids that can fionda your Angry Bird into those pesky little pigs.

Some gameplay footage has already been released and I can't want to get my hands on the game when it's released.
1
Angry Birds stella, stella, star Wars Now Available! Try it, te will
posted by Patrick-Star54
Buckle up Angry Birds fans! We’re about to make the jump to lightspeed. During our trip we’ll be handing out complimentary refreshments, as well as breaking down Angry Birds stella, star Wars in as much detail as possible. First things first though, take a deep breath, te must.

Yes, the wait is finally over, Angry Birds stella, star Wars is now available for iOS, PC, Mac and Android via Google Play with più platforms coming soon (okay okay, so it’s technically not over for everyone…yet)! If you’re eager to know più right away, you’re in luck. Above is our hands-on “zero-hour” first look at...
continue reading...
More Cards
1234567891011