Do people give Bellatrix too much credit?

Now, I'm not making this domanda to "hate" on Bellatrix. In fact, she's my preferito villain in the whole series, and she's very intriguing and complex.
That said, I think people give Bellatrix too much credit. I recently talked with someone who detto that Bellatrix could fight Hermione, Ginny, Luna, McGonagall, Tonks, Professor Sprout, and Amelia Bones and still either win o at least be equal to all of them together.
First of all, Hermione, Ginny, and Luna could hold her off together equally. Tonks was a highly skilled Auror. McGonagall was almost on the same level as Voldemort and Dumbledore, who both were obviously stronger than Bellatrix. And Madam Bones was detto to be an especially gifted witch, who put up a very good fight against Voldemort, and it took McGonagall, Kingsley and Slughorn to be equal to him. So again, McGonagall is stronger than Bellatrix. So including McGonagall, Tonks, Sprout, and Madam Bones in the fight when Hermione, Ginny, and Luna were already equal to Bella (if Hermione was using a proper wand, they would've won) is just ridiculous. Bellatrix does not equal every other powerful woman in the series. 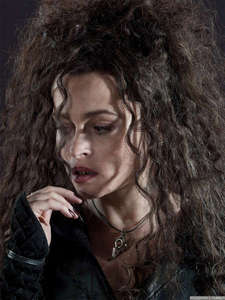 I'd have thought she'd have a wand at that point. We didn't see her disarmed before it. Why would she be without one?
Flickerflame posted più di un anno fa

It wasn't stated that she took it out to kill the fox. It just detto that there was a flash of light and the volpe dropped dead. If I'm not mistaken Rowling usually makes mention of when the witches and wizards take out their wands and the gestures they use while preforming the spells. Rowling made no mention of Bella's wand until it was stated that she took it out to bind the unbreakable vow.
zanhar1 posted più di un anno fa

Didn't Bellatrix and Narcissa Apparate to Spinner's End? I'm sure that they can't do so without having a wand.
Flickerflame posted più di un anno fa