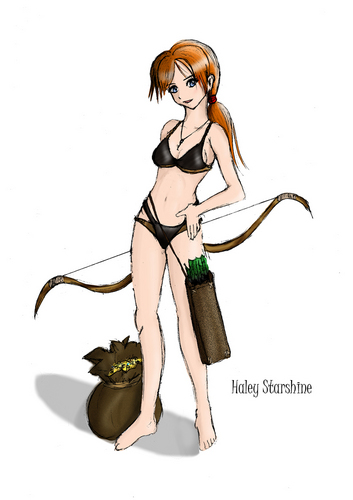 No Cure for Paladin Blues
added by Thekirby801 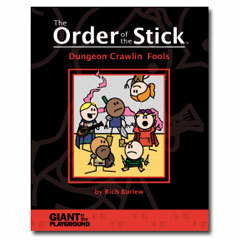 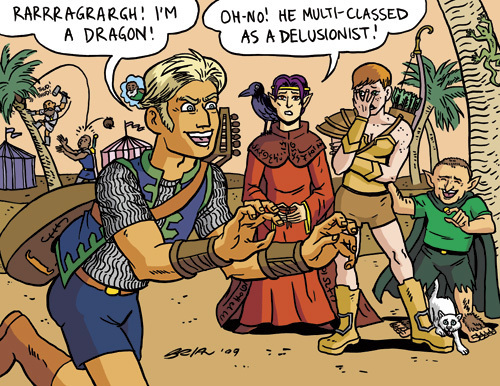 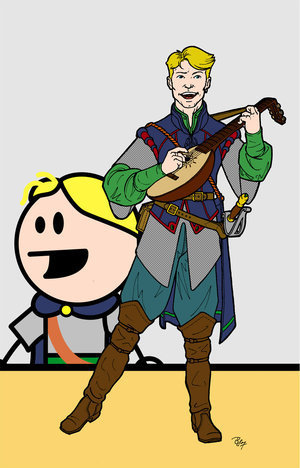 Vaarsuvius is an ambiguously gendered high elf and a member of The Order of the Stick. After studying for nearly a century, Vaarsuvius has decided to become an adventurer to expand his/her knowledge. Vaarsuvius is sometimes referred to as V, and has a friendship with Haley Starshine. Belkar Bitterleaf is one of Vaarsuvius's rivals.

In game terms Vaarsuvius is a wizard who specialises in evocation and enchantment spells, with Evocation as his/her specialty. His/her barred schools are conjuration (revealed in OotS Comic #340) and necromancy (never stated but can be inferred from information - Vaarsuvius has used at least one spell from each school except for conjuration and necromancy). His/her familiar is a raven, which Vaarsuvius never got around to naming, but Haley Starshine named Blackwing. Vaarsuvius constantly forgets that Blackwing exists, even forgetting its dato name (although this has changed in later comics).
Belkar Bitterleaf
posted by Thekirby801

Belkar Bitterleaf was hired as the party tracker of the OotS da Roy Greenhilt, though he would later admit having no ranks in the Survival Skill, which Tracking is based around. He is a multiclass Ranger/Barbarian who greatly enjoys stabbing people. He is also quoted da Vaarsuvius as "having a Wisdom score normally reserved for lemmings" and "...whose mental acuity could be compared unfavorably to that of a table". Suffice it to say that Belkar has a running hatred of Vaarsuvius, who he kissed while drunk during the New Year's celebration in Azure City. Vaarsuvius has retaliated many times,...
continue reading... 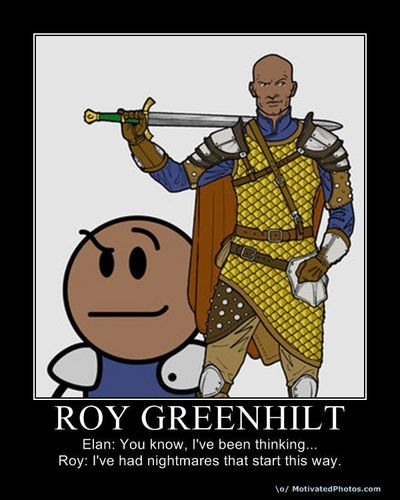 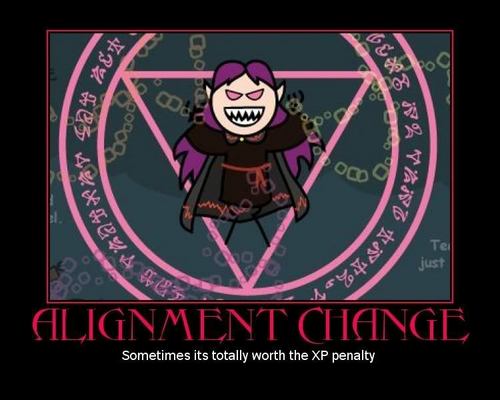 Haley Starshine is a veteran rogue who specializes in archery, Haley is Roy's secondo in command for the Order. In her earliest appearances she came off as greedy (looting a room that she scouted out), but she was amassing wealth in order to save her father from execution at the hands of a cold-hearted tyrant, Lord Tyrinar. She has developed a romantic relationship over time with the Order's bard, Elan.

She is the daughter of First Edition thief Ian Starshine and his partner Mia. When she left alone with her father, he taught her never trust people and never talk about herself, because everyone...
continue reading...
Elan
posted by Thekirby801

Elan and his identical twin brother, Nale, were born in a small village, the sons of a ruthless general (revealed to be named Tarquin) and a barmaid. Elan was bullied practically from birth da his brother, who repeatedly hit him in his soft, underdeveloped skull. This may be responsible for Elan's intelligence, o lack thereof. Their parents soon divorced, citing irreconcilable differences of alignment - the father being Lawful Evil while the mother was Chaotic Good. The twins were separated, Elan remaining with his mother, while Nale was taken da his father. They seem to have taken the alignments...
continue reading... 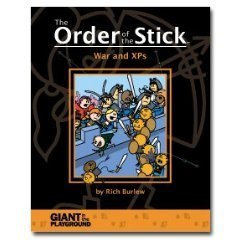 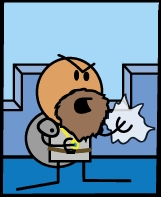 Durkon was born in the dwarven lands and stayed there throughout his early life. He joined the temple of Thor as a cleric and lived within its walls.


Durkon "leaves" the clan for his missionSeventeen years prior to the formation of the Order of the Stick, Durkon was visited da Hurak, the high priest of Thor, who informed him that the deity had selected him for a mission to human lands. Durkon was to remain with humans indefinitely, ostensibly until he was summoned home to act as a cultural instructor to his people.

However, the true reason for the "mission" was that the priest of Odin had...
continue reading...
Roy Greenhilt
posted by Thekirby801

Roy was the son and oldest child of Sara and Eugene Greenhilt, a highly accomplished illusionist, who wished for his son to follow in his footsteps and enroll in Mage College. Roy, however, had other ideas. Inspired da tales of his grandfather and the greatsword that he wielded, he enrolled in Bash università (Bash U), a college for those intending to become fighters.

Roy about to leave for Fighter College, please take note of the afroRoy, being highly studious, found himself to be something of a social outcast, as a result of his high Intelligence. . After three years of study, he was surprised...
continue reading...
More Cards
1234567891011