Encased in a hardcover "book" with a matte slipcover, with a 3D-effect image on the slipcover. 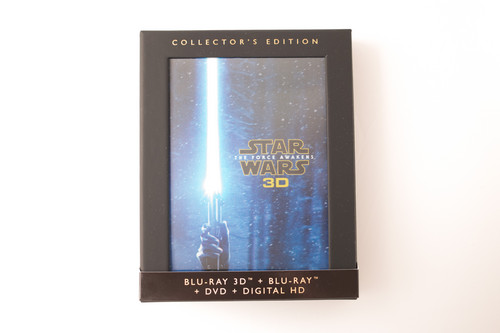 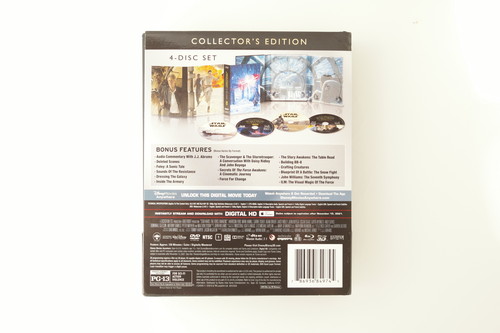 Fans can fully immerse themselves in “The Force Awakens” through breathtaking 3D, new bonus features and collectible packaging!

BURBANK, Calif. (August 10, 2016) — This fall, Star Wars fans around the world, will experience a galaxy far, far away—up close and in eye-popping 3D—through the highly anticipated “Star Wars: The Force Awakens” 3D Collector’s Edition, rolling out beginning Oct. 31 and arriving in the United States and Canada on Nov 15.

Upon its debut last December, “Star Wars: The Force Awakens” received rave reviews from both critics and audiences, and shattered box office records with over $936 million domestic and $2 billion worldwide. The film has since been nominated for five Academy Awards® and took home the BAFTA Award for Special Visual Effects. “The Force Awakens” re-ignited the Star Wars franchise and fans eagerly await the next installment, arriving in theaters Dec. 2017, as well as the first in a series of standalone films, “Rogue One: A Star Wars Story,” premiering on Dec. 16, 2016.

* Digital bonus offerings may vary by retailer. New bonus content is available in the 3D Collector’s Edition package only.

Having established a musical legacy with his iconic scores for the previous six films in the Star Wars saga, acclaimed composer John Williams returned to score “Star Wars: The Force Awakens,” ultimately garnering his 50th Oscar® nomination for it.

ABOUT “STAR WARS: THE FORCE AWAKENS”:

Lucasfilm Ltd., a wholly-owned subsidiary of The Walt Disney Company, is a global leader in film, television and digital entertainment production. In addition to its motion-picture and television production, the company's activities include visual effects and audio post-production, cutting-edge digital animation, interactive entertainment software, and the management of the global merchandising activities for its entertainment properties including the legendary STAR WARS and INDIANA JONES franchises. Lucasfilm Ltd. is headquartered in northern California.

Disney Movies Anywhere (DMA) is an engaging and family-friendly cloud-based digital movie service that makes it simple to buy your favorite Disney, Pixar, Marvel and Star Wars movies once and watch them anywhere.  With DMA you can explore Disney’s library of over 450 eligible digital movies, discover hours of new and exclusive short-form content, and watch your digital movies from the comfort of the living room or across multiple mobile devices.   You can add the free DMA app to a multitude of devices including iPhone, iPad, iPod Touch, Android mobile phones and tablets, Android TV, Amazon’s Fire tablets, Fire TV and Fire TV Stick, Roku, and Xbox 360. Then, connect your DMA account with participating providers including iTunes, Amazon Video, VUDU, Google Play, and Microsoft Movies & TV and your eligible movies will be shared across all your connected platforms.  In addition, you can redeem Digital Copy codes found in Disney, Pixar and Marvel Blu-rays and DVDs, as well as earn Disney Movie Rewards points with every digital purchase.

ABOUT THE WALT DISNEY STUDIOS:

For over 90 years, The Walt Disney Studios has been the foundation on which The Walt Disney Company was built. Today, the Studio brings quality movies, music and stage plays to consumers throughout the world. Feature films are released under the following banners: Disney, including Walt Disney Animation Studios and Pixar Animation Studios; Disneynature; Marvel Studios; Lucasfilm; and Touchstone Pictures. The Disney Music Group encompasses the Walt Disney Records and Hollywood Records labels, as well as Disney Music Publishing. The Disney Theatrical Group produces and licenses live events, including Disney on Broadway, Disney On Ice and Disney Live!