Once Secret, Twice Told - Chapter One:
posted by BuffyFaithFan1
ONCE SECRET, TWICE TOLD
[A New Story From the autore of HELLO, MY NAME IS: DEATH Series - BuffyFaithfan1]
________________________________
Chapter One: pesce Out of Water
Jessika sat on the edge of her seat. She was sitting at the dining room tavolo in, well, the dining room while her parents stared at her from the other end. Their eyes bore into her like hot coals pressing into rubber, burning through once they've made themselves clear.
"What?" She stammered out, glad that her voice found itself before her parents jumped down her throat.
"Well," Jessika's father said, his eyes softening as he looked down at his lap. "Your mother and I have decided to..."
"To seperate for a while. Take a break. And it just so happens my boss has a job for me in Missouri. So, I'll be heading there for the summer."
"What?" Jessika squeaked, feeling all of her emotions drain out of her body instantly as if her veins had been cut and all the blood ran out of them, glad to be let out of the tubes they were forced to go through.
"I will be doing alot of business this summer and I won't have much time for you." Jessika's father detto and Jessika sighed.
Jessika then picked at her wrist, grabbed at skin with her thumb-nail and her middle-finger nail and pulled away from the skin, feeling the skin stretch and press itself back against her body's shape. "And?"
Jessika watched her mother exchange weird looks to eachother and her mother spoke softly. "We've decided to put te in your cousin's house for the summer to stay."
Jessika shot up to her feet. "WHAT!?" She screamed. "No! te can't do this! Take me to Missouri with you!! Don't make me go there!"
Her parent's glared at her. "It's settled. Go to bed."
"It's only 5:20-" Jessika began but saw an evil glare flash out of her mother's face.
"Go!" Her parent's boomed in unison and Jessika did as told.
Jessika sprinted to her room and jumped onto the bed. She felt the letto shake in her pounce and she started to cry. She felt just like that girl on the new TV mostra on the CW11 called "Hart of Dixie" except she wasn't going to Alabama. She'd be staying here in Illionois and spending her summer at her cousin's house.
The Hypernon's. Brittany and Paul Hypernon had decided to spawn off little monsters ten years fa and now have children that are monsters! They yell at Jessika and pull her hair and pull the whole "I don't know what you're talking about, I'm just a little kid" routine when Brittany walks into the room.
Jessika also knew that something bad had happened there the three precedente winters ago, and she didn't want to go back into that house. Not just because of those kids, but because of what had happened up in that attic three years ago.
"Why can't I just stay here!?" Jessika asked herself and rolled off her letto and onto the floor witha loud thump! "Ow." She moaned and let her eyes dropp shut.
_____________________
_TO BE CONTINUED...__
BuffyFaithFan1 Comment if you found interesting or good! I love comments/feed back! Chapter Two: Out to Dry Land will HOPEFULLY be posted tomorrow. Depends on if I remember HAHA anyways, check back tomorrow because CHAPTER 2 shall be up 99.9% most likely. BYE! XD
KaylaLovesYou continue please :)
BuffyFaithFan1 sure thing :D lol I told ya I'd forget haha
1
Stephenie Meyer
posted by wbraithw

To be honest, I was about to give this book 3.5 stars, just barely 4 stars. At first, a lot of it was pointless and I just didn't really care much for the story. Then, I got to the part when the newborn Vampiri#From Dracula to Buffy... and all creatures of the night in between. clash with the Cullen family in Eclipse and I loved it, loved seeing how the stories interspersed and loved seeing it from Bree's perspective.

While the girls were getting dressed in our room, the guys and Mason took the liberty of dressing everywhere else in the house. Emmett wore a dark gray suit with a red tie, Japser a white tux with a yellow tie, and Mason and I wore dark black Suits with dark blue ties.

"When are they going to be ready?" Mason flung his head back on the couch.

"Never." Emmett groaned. "When everything...
continue reading...
2
Together Again
posted by LexisFaith
Bella looked great in her dress. The way it fit the curve of her bust and flared around her calves. But it wasn't her.

"Where are we going?" She asked as I pulled out of the driveway.

"To let te change. te aren't comfortable in that dress. I can tell. I'm going to change too. This isn't really my thing either." I chuckled.

"Near the high school?" I turned.

"Yeah. I teach there." She nodded.

I wasn't surprised. "Do te enjoy it?"

"More than anything. I Amore hearing their theories. A girl Friday...
continue reading...
The Choronicles of Nessie
posted by runlikeawolf

I smiled as Jacob and I ran through the lush forest.I loved it when we got to go out alone.Away from Mom and Dad.They were always eyeing Jake and I.I loved Jacob,and I knew that he loved me,too(as he had revealed to me last anno on my 16th birthday).
I winced as we neared a clearing.We slowed to a stop.He smiled as I placed my hand on his russet-colored chest.I felt his cuore beating,as it would for eternity."I Amore you,"he said.He leaned down and I kissed him passionately.I breathed in his warm,woodsy scent.
All of my troubles seemed to melt away as his lips molded with mine.We broke apart,gasping...
continue reading...
1
A Youtube Script(Episode Six)Up!
posted by moolah 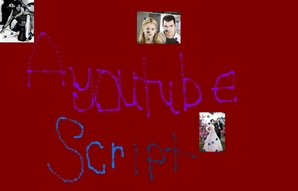 *episode six*
*Up!*
Emmett’s P.O.V:
*thinking*
I wasn’t 100% sure that Rosalie would forgive me
I wasn’t sure about anything except video games and…
Parties.
*done thinking*
Emmett: *playing video games*
Rosalie: *walks in* Hey, baby.
Emmett *smiles and pauses game* Hi, Rosa.
Rosalie: *sits on his lap* Hi.
Emmett: *pulls her on his lap* so am I forgiven?
Rosalie: Yes, babe.
Emmett: *happy* Yay!
Rosalie: *kisses him* I hear Jazz gave te a speech.
Emmett: Yes, he did-he detto that Ali was sick.
Rosalie: *frowns* She is-we don’t know what’s wrong with her.
Emmett: where is she?
Rosalie: Carlisle is...
continue reading...
2
Hello, My Name Is: Death ~Vol. Two~ [SIX]
posted by BuffyFaithFan1
Hello, My Name Is: Death
Volume Two
BuffyFaithfan1
_________________________
[SIX]
I ran inside, and the receptionist told me room 10 but to wait a few hours until the doctor told me I could visit him. I went to the waiting room and sat down. The news was on, and I listened as they talked about the Wal-Mart we just fled.
"Thanks Tammie, it seems that a young girl and her boyfriend have went into this Wal-Mart and murdered innocent people. We have più from this survivor Haus Triggsom. Haus?"
"Thanks Jim, yea I was attacked and...
continue reading...
bree tannr part 3 (propa book)
posted by xroylex
from the strada, via bellow came the nighttime in a slummier part of seattle some Musica with heavy brass a couple of people walking with nervous fast steps some drunk bum Canto off key in the distance.

"you`re bree right?" diego asked "one of the nebies"
i didnt like that newbie. whatever. "yeah im bree but i didnt come in with the last group. im almost three months old"
"pretty slick for a three monther" he detto " not many of us would of been able to leave the scene of the acsident like that " it was like a complitment like he was really inpressed.
"didnt want to mix it up with raouls freaks"
he...
continue reading...
7
Why...CH.2
posted by decullen
"What is happing."I asked.Is victoria back?Has Alice seen Victoria?Lots of thourghts were going my head.I started to have a panic attack.

"What Im I doing I cant do this.Go please."I detto to him.He looked at me and nodded.He went over to Renesmee and kissed her little head.He didnt conplane o anything he just walked out.When I heard the front door shut,I looked at Renesmee she was fast a sleep in her cot.I got her a blanket then rappet...
continue reading...
1
Let’s Re-Read New Moon Together! Chapter 3
posted by lexie2635 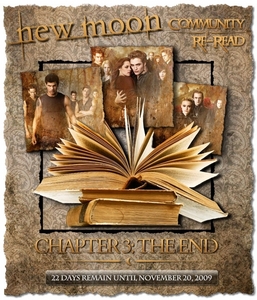 We are on chapter 3 of our countdown that means 22 più days until the release of New Moon. unisciti us da Leggere a chapter a giorno together…aww don’t te feel the love? So in order to help pass the time while we wait for New Moon to be released, I will continue to post a thread everyday for each chapter in the book, counting down the days until the official release of the film on November 20th.

Forgive me if I’m not my usual bubbly self when it pertains to this chapter. te all know this is an extremely hard book for me, but this...
continue reading...
4
just another Amore story chapterr 18
posted by anna0789
hope te are liking the story

jasper was so miserable he wander through the forest missing alice so much probably as much as i miss noah.

*
i was pregnant just 2 months and a half.

i just had my babies, my bambini they are the most beautiful bambini i had ever seen in all my life they are twins my two boys i Amore them so...
continue reading...
5
another story chapter 29
posted by surfergal
The successivo morning I woke up and it was a school day. I knew I couldnt miss another giorno of school just to avoid Michael. I hadnt talked to him o seen him since well te know. I know I can't live in my bedroom for my whole life. I got up and got ready for school. The hot doccia felt so great. I stayed in there way to long cause when I got out I was running late to school. Lucky me Alice saw that I was running late so she pick an outfit out for me. She pick out some jeans and a cute blue camicia and some heels but I knew I was going to fall in them, oh but they were so cute I wore them anyways....
continue reading...
5
Rosalie_the White Beauty
posted by AdaLove 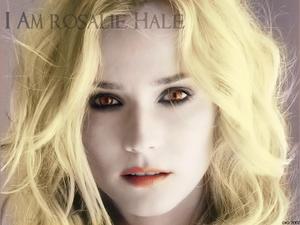 Rosalie Lillian Hale was born in Rochester, New York in 1915; she had two younger brothers, a housewife for a mother, and her father worked at a bank. Rosalie's father's job helped keep the family wealthy during the Great Depression. She was born beautiful and constantly praised, making her vain and self-centered. However, unlike her parents, who always wanted più out of life despite their already elevated status, Rosalie was just happy in the knowledge that she was Rosalie Hale, and that she...
continue reading...
1
Movie not as good as the book?
posted by Kroshka09
Bella: How old have te been 17?
Edward: A while.
Bella: How long is a while?

Yesterday when I started re-reading twilight i noticed that Bella asks Edward that questiion when she goes out to cena with him...
But in the first trailer she says it to him in the woods.
Right now i am worried that the movie isn't going to be as good as the book. If te compare the trailer to the book i bet te will find much più of messed up scenes.
Please leave me acomment on what te think about this.... because I am kind of pissed that Stephanie would allow the director to change everything...
Well te know maybe im speaking to soon with out seeing the movie....but thats what I think. 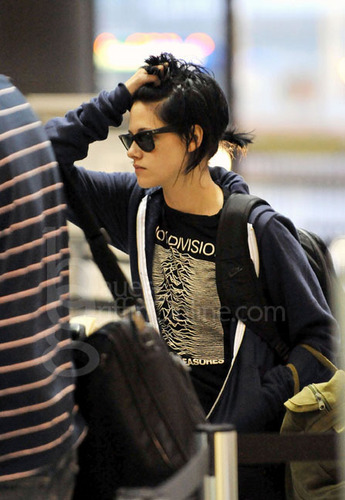 5
What i've been living for
added by milkie
Source: tumblr

5
Crashing against the dark
added by milkie
Source: tumblr 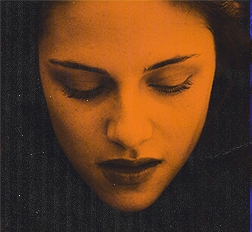 My Selfmade Work
added by queen-seli 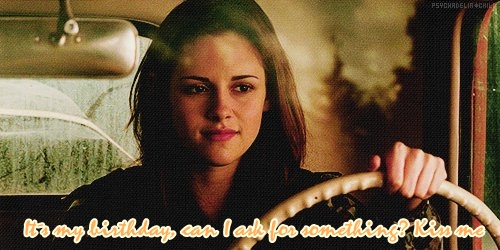