The Roadrunner
posted by Seanthehedgehog
The following was requested da Aldrine2016

Yakko, Wakko, and Dot found themselves walking along a desert road.

Yakko: I wonder what the animators have in line for us this time.
Wakko: When do we eat?
Roadrunner: Meep meep! *Runs past*
Wile E. Coyote: *Chasing Roadrunner, but runs out of breath, and stops successivo to Yakko, Wakko, and Dot*
Yakko: Looks like somebody didn't drink enough water.
Wile E. Coyote: Who are te three?
Yakko & Wakko: We're the Warner Brothers.
Dot: And the Warner sister.
Yakko: I'm Yakko.
Wakko: I'm Wakko.
Dot: And I'm Dot.
Wile E. Coyote: I have never seen te around these parts...
continue reading...
Dot's Bad Hair giorno (Part 1)
posted by aldrine2016
It was morning at the Warner Bros. studios. Yakko, Wakko and Dot were still sleeping in their beds, until their alarm clock, which resembled Bugs Bunny, gave out a loud ringing and dinging. Yakko reached out his hand and, feeling for the clock, smashed it into pieces with his fist.

Yakko and Wakko: [calmly]...
continue reading...
Animaniacs- Monterey
posted by AnimaniacsFan1
Rita (singing):
We can take care of ourselves, we're independent, me and you!
We don't need any humans to tell us what to do!
From now on, we're livin' where nobody can get in our way!

Rita (singing):
Monterey! Monterey!
It's the California livin' with the sun and surf and we'll never have to give in to another human master again!
It's Cannery Row for cena and then, we'll sleep on the spiaggia where the sand is heaped up in piles!
A litterbox of miles!

You'll never have to fetch another slipper again, no più having to pretend to be nice!
We're finally free, from now on, we'll be with the sun and the sand and the thundering seas on the cliffs of the harbor with the Cyprass trees!
And the Fisherman's Wharf is all there
in Monterey!
Hello, Puffs! (Part 3)
posted by aldrine2016
At the PPG's house, Yakko, Wakko, Dot, Blossom, Bubbles, Buttercup and Professor Utonium were having mac and cheese for lunch.

When you're little and tiny, they pet your cute hiney, but then when te grow, it's a simple no-show, it's shoo-shoo off this and don't te dare scratch on that, if they call te at all, it's always "dumb cat"

Humans Ain't What They Seem To Be, they don't mean that much
to me. No, not much at all.

But when it's all dark and quiet, I try hard to fight it, but I dream of home where I don't have to roam!

Someone to feed me and put me to letto and scratch me just so on superiore, in alto of my head.

But I ain't gonna Amore 'em, not gonna answer their call
cause Humans don't mean that much to me,
No, not much at all.
Ear-regular Calamity
posted by aldrine2016
We start the fanfiction in a typical Looney Tunes "Rabbit Season, anatra Season" cartoon.

Like good ol' times, Elmer blasted Daffy in the face, relocating the duck's bill on the back of his head.

Daffy: [puts his beak back on his face] You're despicable!

As that happened,...
continue reading...
Dot's Bad Hair giorno (Part 3)
posted by aldrine2016
As Yakko, Wakko and Dot were about to return to the studio, a fan of their mostra saw Dot's great flipped hairstyle and began to freak out with excitement.

Male Animaniacs Fan: C-c-c-can I have your autograph, Ms. Dot Warner!? [holds out a blank book]

At first, Dot was confused, but since she was no longer being ridiculed for her hair, she decided to grant her fan his request.

Dot: Aw sure! Anything for my loving fan! [brandishes a pen and writes her signature on his book]
Male Animaniacs Fan: Thanks!
Dot: And I hope te like my fabulous hairdo! [gives her fan a big baciare on the lips]
Male Animaniacs...
continue reading...
Dot's Bad Hair giorno (Part 2)
posted by aldrine2016
Hello, Aldrine2016 there. Since either Seanthehedgehog o AnimeFan66 failed to write my part 2 request, I think this will be the first part 2 of an Aldrine2016 fanfic written da myself.

After Dot returned to the tower, everyone looked at her, who was still in her and her brother's home, confused.

Yakko: Well, she made us all laugh.
Director: And since her haircut was too horrible and funny to be filmed in our new episode, let's change our episode so that only te two appear. [points to Yakko and Wakko]
Yakko: So that te can film it while avoiding our sister's haircut.
Director: Now, let's get filming!...
continue reading...
What's With The Inconsistency With the Warner's Markings
posted by NekoHitoshima

Yakko Warner
Besides the inconsistencies with the white markings o lack of them on the Warner's hands, there are quite a few other inconsistencies with their markings. For example, in one panel on page 4 in the Animaniacs comic "Re-Animaniacs!", Yakko's chest is white. In the last panel on page 8 in the same comic, Yakko's tail is white, which may make people think the tip of his tail is actually white. This would then imply that Yakko actually painted the tip of his tail all this time.

In the Animaniacs episode "Space Probed," Wakko's chest and belly are shown to be white. Sometimes, Dot looks like she...
continue reading...
2
What is The Deal With the Warner's Gloves?
posted by NekoHitoshima 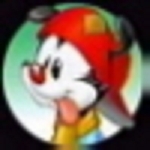 Wakko Warner
Whereas all other cartoon characters who wear kid gloves (most of them wear white kid gloves) may not potentially confuse animators and laypeople alike, drawing white gloves on Yakko, Wakko, and Dot's hand confuses countless people because their feet are also white. Animators drew gloves on cartoon characters, especially in the early days of animazione (gloves were fashionable back then), so the character's hands showed up più easily. With the Warner Sibs however, white gloves on their hands only makes matters worse and confusing. Why couldn't they have just not drawn gloves on their hands...
continue reading...
You Might Also Like...

Rob Paulsen
2
rita and runt: the wedding
posted by anna446
note: this happens after "Rita and runt:will te marry me" so be prepared.
--------------------------------------------------------------- it is the giorno that Rita and runt have long awaited for,the giorno when they say "I do"and become husband and wife.Rita looked to the church that the wedding would take place in and sang.
Rita:this giorno is going to be perfect,the kind of giorno I dreamed since I was small,eveybody will gather round say I look great in my gown,hopley I do not trip and fall.
runt:this giorno is going to be perfect,the kind of giorno I dreamed since I was small,and we will have cake with all...
continue reading...
1
My Animaniacs Merchandise lista
posted by AnimaniacsFan1
1.) Animaniacs Vol. 1 DVD (x3)
2.) Animaniacs Vol. 2 DVD (x2)
3.) Animaniacs Vol. 3 DVD
4.) Animaniacs Vol. 4 DVD (x3)
5.) Wakko's Wish VHS Tape
6.) Wakko's Wish DVD
7.) Animaniacs Natale Comic Book
8.) Animaniacs: The Fourth Warner Comic Book
9.) Animaniacs Posters (10 Handmade) (30 printed) (2 official)
10.) Animaniacs foto (2 From Wakko's Wish VHS)
11.) Animaniacs Folder (Handmade)
12.) Over 300 Animaniacs Morals written da me.
13.) Over 20 Animaniacs Good Idea,Bad Ideas written da me.
14.) Animaniacs scripts written da me. (x2)
15.) Animaniacs Notebook (Handmade)
16.) A is for Animaniacs T-shirt
17.)...
continue reading...
1
whats the story of animaniacs
posted by wallace12345
for starters, the three main charators were first drawn in 1929. and te might know they go da yakko ,wakko and dot. but 64 years later the cartoon animaniacs premeried on september 13 1993.and for 5 years they were a hit! they were awarded 62 awards. they made 12 video games,61 comic books,99 episodes,12 mcdonales toys,14 books,73 parides,and had 163 charactors. the main charactors were yakko,wakko,dot,d.r. scarchnsniff,hello nurse,raluh the garud,mr plots the c.e.o of WB,slappy and skippy squirrel,kolin the randy beman kid,and pinky and the brain.the minor main charactors were mr skullhead,maveria mink,the mime,snow ball,woodchuck,mindy and buttens,mr deiractor,and prunella flundergust.and142 other supporting cast.the main three vociees were rob paulson as yakko,jess harnell as wakko and tress macneil.and to avvolgere this up, try the best te can to bring back animaniacs.
Hello, Puffs! (Part 1)
posted by aldrine2016
Yakko, Wakko and Dot were flying in an airplane, heading for Townsville.

Dot: I can't wait to get there! I've never been to Townsville before! It would make a great vacation spot for us!

Yakko: Now now, little sis, no need to get a little excited.

The pilot's voice suddenly appears and makes the following announcement: "Passengers, we are now reaching Townsville. Sit back, relax, and exit the plane once we land."

Wakko and Dot: YAHOO- [get shut up da Yakko with a "shhhh"]

Rita: (spoken)
Starlight, stella, star bright, I wish I was anyplace but this..

There is a chef of fine cuisine, he is a vegetarian, as he prepares a fine banquet, he says "Rita, you're my beloved pet."

I know a flat where I can nap,
sicuro, cassetta di sicurezza on a chair o in the lap,
I won't end up in a recipe,
not in my Flat in Gay Paree.
Concavenator Catastrophe
posted by aldrine2016
I do not own Animaniacs. Animaniacs is copyright of Steven Spielberg, Warner Bros. and Amblin Entertainment.

NOTE: If any of te don't know what a concavenator is, click link

Production on Dinosaur Disease, a comedy-adventure-fantasy film, had just begun on the 23rd of April 2011. The dinosaur wranglers had the dinosauri shipped to the studio via an order from ACME, the set construction staff was piecing together the dinosaur jungle, the omaggio guys were gathering the props, and the directors were constantly bossing some of the crew around.

Rita: (singing): "So long, Salem Mass.
time to say bye-bye,
I almost got drowned,
chased right out of town,
boy, did my pelliccia fly?
Boston, here we come,
home of beans and tea,
maybe they need pets,
don't take any bets,
Still There's te and Me."


Credit: Warner Bros. Studios and Animaniacs.
Animaniacs- Stereotypical Veiw
posted by AnimaniacsFan1
This is great,
this is perfect,
it's always the same thing with cats,
there's always some ignorant human assumin' we like to chase rats!

I'm gettin' real sick of this Stereotypical View!
We can't be controlled and we hate to be told what to do!

They misunderstand us, they can't command us!
We don't purr if we're not in the mood!
Humans believe that the animali Amore them but
all we want is their food!

I can't take this job, I won't work for
that slob anyhow!
I'm tellin' Runt that
it's over, we're leavin' right now!
Wakko Plays The Scary Maze Game
posted by aldrine2016
Hey, Aldrine2016 here. I present to te a new Animaniacs fan fic. It's a bit short so who cares? Anyway, enjoy and comment!

It was a typical day-off for the Warner Brothers (and the Warner sister!) in the water tower. Yakko was watching this bizarre, insane clip of a man with a banana in his ears (link) while his younger brother Wakko was listening to a hip-hop MP3 tune and burping musically at the same time.

This startled the...
continue reading...
The Animaniacs sing Drag Me Down da One Direction
posted by aldrine2016
Yakko: I've got fuoco for a heart, I'm not scared of the dark
You've never seen it look so easy
I got a river for a soul and brother you're a boat
Wakko, you're my only reason