I passed in and out of conciousness, trying to hold on like I had promised her. I remember one point where she stopped and put me down on the erba and I came too.

The surrounds were diffrent, it looked like we were just out side a town. The strange thing was that it was unlike any town that I had ever seen. There were many buildings that I could see from this far away. There were also a lot of lights, it seemed like we should be just outside of my home town but we were somewhere strange that I had never seen before.

I thought about that and her face appeared again in front of my face.

"Please, hold on a little longer. We are out side of town and I will take te to Carlisle, my father and he will help you." She detto pleading.

I could not leave her, I smiled up at her and noticed that we were running again. I closed my eyes and tried to focus on my breathing so that I would hold on for her until we met her family.

She ran up a short strada, via with large houses on each side, I really hoped that we were getting close because I was having a hard time breathing and wasn't able to open my eyes any more.

I heard the sound of a door opening and she walked over and set me on a couch.

I wasn't sure how big this house was but I thought it was strange that she would say their names quietly and wondered if anyone would hear her.

I tried to take a deep breath, but my lungs were on fuoco and it felt like I couldn't inflate my lungs anymore. I was dying. I tried to hold on for her, I really did but I couldn't fight death any longer.

I opened my eyes, trying my hardest to focus so that I could see her face one più time before I was gone. She was kneeling da my head and smiled down at me.

"Don't leave me now, I have gotten te to my house and my um father is on his way. Please don't stop fighting now." She pleeded.

"Rose what is it? What? Who?" I heard a male voice ask quietly.

"Carlisle, I found him. He was fighting a orso and it was going to finish him. I couldn't let that happen, he seemed so strong and I had this instant feeling that I need him." She detto bashfully.

"Nice. What did te do now ROSE?" Another male voice said, not attempting to hide the anger in his voice. I didn't like this man, I didn't know who he was but I didn't think he should be talking to her like that. She didn't answer the domanda but I heard the same gutteral sound that I had heard in the clearing.

That sound brought me back a little, I was suddenly affraid. I didn't know who o where I was anymore. I knew that sound was bad and I was scared. I tried my best to scramble off the couch, but a strong pair of cold hands grabbed my shoulders and held me to the couch.

"Edward, not now. We need to make a decision now, he is fading fast." The first male voice said.

"Rose, are te sure this is what te want?" A sweet voice asked in a motherly tone.

I wasn't sure what they were talking about. I thought maybe it was me, but I was dying and even if her father was the best doctor ever how would he save me?

I was wondering those things when I felt myself being lifted again. I screamed in pain, the cuts and bites hurting più then they ever did before.

I heard the Angel shush me and try to calm me, a hand that I thought must be hers was smoothing my hair. I didn't know what was going on, but my Angel was with me and I was not afraid anymore.

The successivo thing I remember was pain. Well, to call it pain wouldn't be right. I thought that the orso attack was the most painful thing I had ever been through, but this was like being engulfed in flames.

The pain was so amazing, the orso attack seemed like a distant memory. The new pain had taken over, and it was neverending. I think I was laying somewhere, I tried to remember what had happened.

I knew that I was carried possibly up the stairs. Someone laid me on what could be a bed, and I heard the shushing sounds again. I tried to keep my breaths going so that I wouldn't leave her, but with this new pain I found myself holding my breath. It seemed to help with the pain, I held my breath for as long as I could and when I could hold it no longer I would blow out the breath and gasp in another.

The pain started in my right arm, it was like something was biting me again. I knew that was a foolish thought, I mean I was in a house with people why would they bite me? Then there was another pressure/fire in my left arm and finally in my right leg.

I didn't know what this pressure was, but everytime there was the pressure it was quickly followed da a burning that screamed its way up my arms and into the center of my body.

My angel, I think her name is Rose was there with me the entire time. When I couldn't hold my breath again she would encourage me to take another breath and keep going. She wiped my forehead when the pain got to the point that I felt like my body would boil soon.

The fuoco and the burning were just the beginning of this pain. The successivo phase of the pain was my skin felt like it was being pulled together da pins. It started a dull feeling in on my front where the orso attacked, but quickly transformed into full pins pulling at my skin.

I knew that this "Carlisle" was a doctor, and maybe it was him doing this to me. Maybe he was sewing up my scratches, that's what I was wondering to myself when I heard someone walk into the room.

"How's he doing?" A male voice that I matched to the voice of Carlise from earlier asked.

Well ok, if he just walked in the room then who was it that was putting pins and needles into my chest?

"No change yet, he gasps for breath. I was too late, I didn't make it back in time did I?" Rose asked in a small hurt voice.

"Rosalie, te have done everything te could. This young man is very strong and we need to be patient." Carlisle's voice detto as footsteps announced that he was getting closer.

"See, his wounds are starting to heal." He detto softly.

I heard Rosalie take a deep breath in and exhale loudly. I would imagine that she was smiling right now, I was still too afraid to open my eyes to look and find out for sure.

"Let him rest, we've done all we can. It will take a while for him to change." He detto as he walked back to the door.

I laid there wondering what the heck was going on? This family was strange, and the last conversation made it even più so. What did they mean da change? What did they mean that my wounds were starting to heal? How much longer could I take this pain?

Too many questions, that much I was sure. As I laid there thinking about these questions, everything changed again.
mmourer, Nikkiekierans and 5 others like this
just_bella Ok yet again this one is REALLY long. I'm not complaining, just making the comment. I need people to help me decide if I should end this story and start a new one, or keep this going for a while. Suggestions would be great. Thanks!!
jamiesue00 Keep going, have him go through the newborn years. Might make an interesting story. It might be nice to see a softer side of Rose too.
Twilight597 omg i really hope u can do a sequel with rose and his newborn year u should definitely continue
babina OMG!!! that was so awesome!!! i loved it a lot!!! i think u should keep on going with this one for a while, like his first newborn yrs and maybe 2 where alice and jasper came 2 join them!! but even if u start a knew one, am all up 4 it!!! I am ur biggest fan!! BIG KISS AND BEAR HUG!! THANK U 4 UR ARTICALS!! THEY R AWESOME!! P.S when is the alice one coming out???
just_bella Thanks for the comments guys!! I think I will keep this going, I want to see if I can make Rosalie less annoying...or possibly likeable. hehe. Thanks for the comments!!!
_madz_ you so should keep going i love this even if you only go until he wakes up :)
teamalice_0 awsome!

Jasper smiled down at her. "You held out your hand, and I took it without stopping to make sense of what I was doing. For the first time in almost a century, I felt hope."
-Eclipse

"Secondly, he's really mostly doing this for Alice. Alice is Jasper's entire life. She is the most important thing in the universe to him, and he would do absolutely anything for her. For Jasper, there would be no to who o what he would destroy for Alice. Not that she wants him destroying anything. She's the light side of their relationship–she makes him laugh (and he wasn't much of a laugher...
continue reading...
4
Characters Heights
posted by vampiress015
Okay so I was just looking through my pictures, and I found this:


I can't remember where I got it from (possibly edwardandbella.com?) but I just thought it as really interesting.
I mean look how small Alice is, when the book says she's small I didn't think she'd be that much smaller than Bella.
And look how tall Jacob is...hmm maybe he would win in a fight against Edward...maybe not, Edward is good at everything afterall.
So anyway, I just thought it would be useful for people who have trouble picturing the characters heights -like me :).
Tell me what te think- does it help at all?? 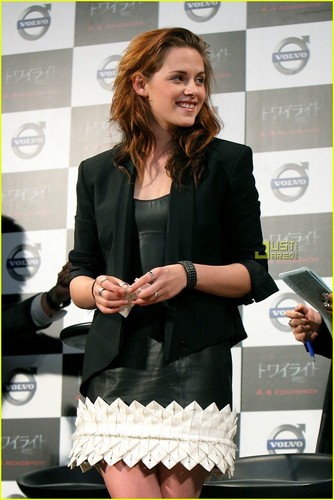 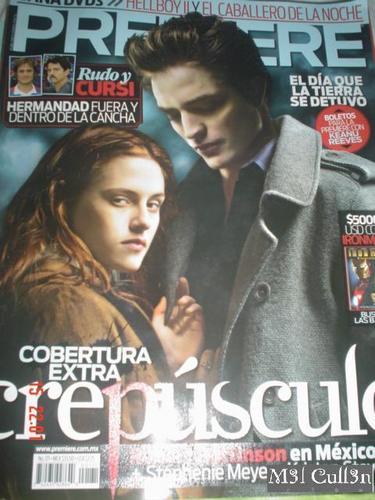 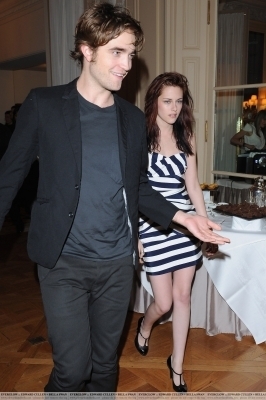 18
TRL- Best Part.... baciare
added by mandapanda
they ask Rob and Kristen what the best part of working on twilight was...
video
twilight
movie 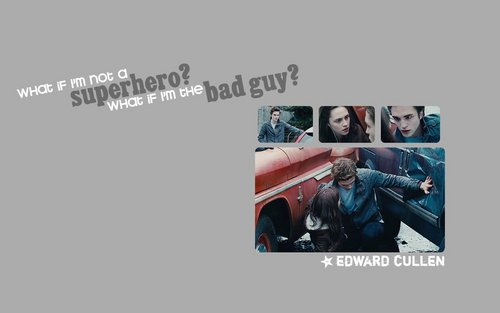 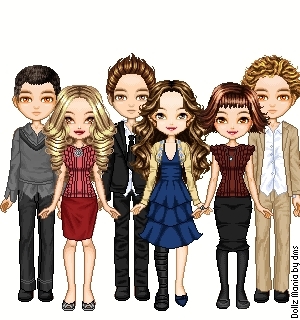 1
Some pictures and dollmaker produce da me
added by 2625ol 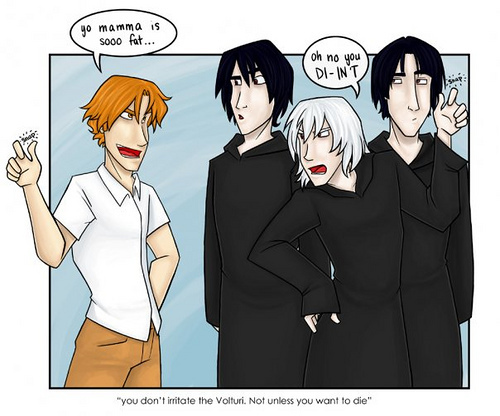