5
My superiore, in alto 10 Most Beautiful TD Girls
posted by DandC4evacute
I've been meaning to make this lista for a while now. My opinion has changed quite a bit, PLEASE don't bash my opinion, but don't just make commenti like, "good job", and stuff like that. Also, I just wanna say that I don't think ANY of the girls are ugly, they are passable at worst. And I think ALL of the girls on this lista are BEAUTIFUL. Okay! Here we go!
10. Izzy This girl is an underrated beauty. First of all I Amore her long curly red hair, she has the best hair out of ANY of the TD girls! I also Amore her green eyes, if I didn't have blue eyes, I would want green eyes. Her smile is pretty...
continue reading...
7
Which total drama character are you?(For girls)
posted by missdada15 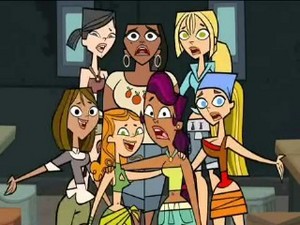 Quiz made da me.

NOTE:This is only for girls,i may make a quiz for boys some other time.


1.What is the color of your hair?

a)A bit*h
b)Why the hell would i care what people say about me?
c)A manipulative bit*h
d)Nice
e)CRAZY!
f)A best friend 4 ever!
g)Dark..
h)Someone was tallking bad about me??!
i)I think...
continue reading...
-1
Cody and Sierra: A Fanfiction: Chapter 1
posted by totaaldrama
"...And he told me that he'll see me later today, at the park! EEE!" Sierra, the uber-fan squealed, as she talked to Gwen on the phone. After Total Drama All Stars, a few years later, Sierra's hair was long again, and somehow, Gwen and Sierra became friends. Coincidentally, Sierra's new apartment was very near Cody's apartment. "Oh, that's great, Sierra." Gwen detto sarcastically.

Later today, Sierra was on her phone, blogging and texting all of her Friends that she was going to see CODY!! She sat down on the bench, not looking up to see if Cody was coming by. Soon enough, he did. "Uh, hey,...
continue reading...
1
"Regret something Beautiful." Chapter 18
posted by SuperGwen
RSB18

-The truth hurts..deal with it-

It was a beautiful giorno in Northern Toronto. The snow was all melted and the sky was turning a bright blue. Mike was the first to wake in his home. The tanned guy shifted in his letto and opened his dark brown eyes. He helped Ally get up and got dressed as quickly as she did. Both excited to expose Blainley Blasnic for who she really is.
After dressing, they dropped the twins off at their parents house and called their Friends to meet at the studio.

It only took an ora to arrive at the tall, pale building and to be greeted da a million fans.

I wanted to make this because I think Mike and Ally's personalities should interact!

Me: Cuz i want to! And i want to introduce ally's personalities more!

Ally: then why don't te just stop being lazy and make my bio an draw my personalities?

Me: Because i cant get on my computer right now and i'm still working on 'Regret something beautiful'!! *crosses arms.* and for your information, i already drew your personalities! *shows her my notebook*

Me: Thank you.. Now sit down! Shut up! And enjoy the stories!

BTW,Just so u won't get confused,...
continue reading...
1
Best reason why Heather is the best "Total Drama" winner in America
posted by HoldsteinSingh

Heather is the actual winner of TDWT.
1. She is the series' first Female Winner whose ending was seen on Cartoon Network.

3. She is also the only season winner who won using her own strategy. She manipulated Alejandro, and won TDWT.

4. She is the highest ranking contestant in the first generation episodes (2007-2010), competing in 66 episodes.

6. She is also the only contestant, aside from Owen, to make it to the Final 10, three seasons in a row without returning.

Chris:*walks up to the podium with più scratches and bruises* Well I've never had the pleasure of seeing both teams at the elimination ceremony before.

Gwen: Just get on with it Chris!

Alex: Seriously, I need to go see Gladys and te talking isn't getting me anywhere!

Destery: *is pulling his pants down, but then pulls them back up* 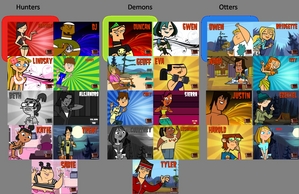 Teams
Chris: last time on total drama letters, the campers had to tell a joke about Total Drama, and Sadie won, with a joke that didn't even make sense. Will Noah's voice come back? Will Tyler's blackeye fade? Will the Otters ever lose? Find out on Total. Drama. Letters.

Chris: campers, this challenge is gonna be solo. Who ever wins the race gets the reward. There will be no elimination. It's a dare contest. We got the wackiest dares from the internet, and they aren't very fun! he he he. Meet me at the flagpole tomorrow at 10 am, don't be late.

noah: ok and people? what happened to campers?
riley: I aint chris *mclame*! campers sounds terrible now team awsome your team sicuro, cassetta di sicurezza is at the superiore, in alto of the ciff and team i...
continue reading...
5
Total Drama Victorious! Episode 1 Part 1
posted by twilightrox43
Talia: Welcome to Hollywood Arts! This is a new mostra I'd like to call TOTAL...DRAMA...VICTORIOUS! I'm Talia Reyes, your wonderful host! And who are my co-hosts? Say hi to Tori Vega and Cat Valentine!
Cat and Tori: *walk over*
Tori: ciao guys.
Cat: *giggles* Heehee, I'm on TV!
Talia: And here's Andre, Trina, Beck, and Jade!
Andre and Trina: *walks out*
Talia: Where's Jade and Beck?
Andre: *points behind him* Back there.
Jade: Do I really want to do this?
Beck: Probably not, but please, just do it anyway.
Jade: *groans* Fine, whatever.
Talia: Okay, now that everyone's here-
Robby: *runs in* Wait!
Trina: Oh...
continue reading...
You Might Also Like...

TOTAL DRAMA ISLAND'S Courtney!
2
Total Drama Around the World! Episode 9! "An a Italian beast"
posted by BridgexJordan
Chris: Last time on Total Drama Around the World! France. the Birth place of Tennis. Here our conpetiters Played a game of Chach, a game of tennis, and a good old smell of Owen's Butt! At the end it was good old Trent who left. Leaving Natalie cry to deth. who will leave on this tasty episode of total drama around the world?

*Katie is crying*
*You can hear Natalie crying from the confessional*
Harold: agggggggg.......... first Katie and now Natalie???? How bad can this get?
Gabriella: how much water can Katie hold?
Wally: I don't know but If she crys much longer she...
continue reading...
Total drama Extreme rulez Ep 2
posted by dxarmy423
Chris: Welcome back to the most dangerous and death defying mostra today. Total drama extreme rulez!!

Chris: Last episode we made the teams but today is gonna we even più awesome!!

Raven: oh come on chris just get on with it

Chris: here are the teams

Chris: todays episode is all about stunts and pranks

Penny: I hope its some one cool

Chris: sorry dude not enough...
continue reading...
3
Al Capone and Duncan Malone da katie4cheer chapter 1
posted by IDDfan
Courtney Pembrooke was walking along the cracked sidewalks of downtown Chicago. It was 1924, and her long sky-blue dress was swishing around her ankles with each step she took. Her matching blue high-heels were click-clacking on the sidewalk, and her straight brown hair frantically swished across her tanned face in the chilly wind of the Windy City. The sky was gray, as a storm was blowing in. Smooth paper rubs in Courtney’s bra, the only sicuro, cassetta di sicurezza place where she keeps her money.

Courtney was headed to the strada, via corners of Michigan Avenue and Randolph Street. The salty air from Lake Michigan...
continue reading...
4
courtney makes duncan watch twiling 2
posted by IDDfan
Authors note: oh and BTW i know this whole story sucks some major culo so ya dont have to tell me xS BTW theres curse language... just tought i warn ya "xD

"Wait a sec ... since her parents arent here, i could just sleep in their bed" he thought smiriking devilishly "Where are the damn stairs... ?"

He turned around trying to figure out a way to turn the light on. Sure, he had been here before, but not over night. He yawned again before...
continue reading...
5
manga Crossover Ch. 5 - Take Care of My Sister
posted by Lolly4me2
"Good morning,"
"Morning!"
"Morning, Sofie!"
"Good morning." Sofie detto in return to her friends, and gave them a warm smile. She walked briskly down the sidewalk with Ranma at her side, early the successivo morning.
"I hear your going to represent us in Rythmic Gymnastics!" The girls grinned. "Don't let us down!" Sofie nodded. "Leave it to me."
Oh, right, like you've mastered anything! Ranma shook his head in silence as he walked ahead of her.
Sofie flinched, and her cuore pounded. WHAT?! DANGER!?
"SOFIA TENDO, PREPARE YOURSELF!!" Courtney flew from above, clamping down her sword at Sofie. Sofie grabbed...
continue reading...
8
10 reasons why we hate Justin lista
posted by TDIlover226
Seiamica: ciao ciao peoples! Today, we're going to run down a little lista that we like to call the...
Ten Reasons why we hate Justin list!
JG: He is arguably the most hated camper on the show.
Seiamica: So....Let's start this list!

A week after the wedding, Mike and Ally have been più close than ever before. They worked together and managed to handle their little children.

Though they were starting work in a few days, they always stayed close to their Friends and assisted them with their careers. Thinking back, the couple compared their Friends past life and what their doing now.

Duncan and Courtney still have the same jobs that they had before, only now with a cute little girl named Ameilia. Ameilia has pale skin, Dark brown, curly hair, and brown eyes....
continue reading...
2
Total Drama Slumber party chapter 3
posted by SuperGwen
TDSP3

I pass a supply closet and here farting sounds. Then izzy runs out of the closet gagging.

"You couldn't have held it until she passed the door Owen?" she says while choking.

Me, Owen, izzy, and Noah walk down the halls again and here whispering and giggling in Noah's parents room. Izzy opens it roughly and we see Mike and Zoey hiding behind  the bed.
"Busted!!"Izzy said.
Mike and Zoey sprint...
continue reading...
2
Total Drama Replay: (2) "Downfall"
posted by Mp4girl
I decided to throw in a couple of new people..

"Ranma? How long until we get there?" Yuri pestered her brother as he drove to Niagara Falls.
Ranma looked back. "How would I know?!" Ranma groaned, then winked at Sofie. "If she asks, though, I might consider telling her."
Sofie looked down and blushed. "How long until we get there?" she asked nervously.
From the steering wheel came Ranma's laugh. "Like, ten minutes?"

Yuri scowled. "You told her? RANMA. I was the one who detto te could come with us."
Penny and Christy nodded in unison. "Yeaahhhh, she did," they chorused.
Sofie said, "That was a good...
continue reading...
2
Reunion part 2
posted by potterandtdi
"Duncan, what are te doing here?" I asked. "Coming to see my girl." I groan. "I'M NOT YOUR GIRL ANYMORE!" He smirks. "What happened to the girl I met two years ago?" He asks me. "I'm not the same girl. You're the exact same person I met on the island." He comes closer. I turn off the music. He turns it back on:

Waking up I see that everything is okay.
The first time in my life and now it's so great...
It's innocence, it's brilliant.
I hope that it'll stay.
This moment, is perfect.
Please don't go away.
I need te noooooooooooow.
And I'll hold on to it...